Patpong is the oldest and most famous of the 3 Red Light Districts in Bangkok, having been open since the Vietnam war days. It is the Bangkok Red light district that most tourists will visit ahead of Soi Cowboy or Nana Plaza. Super Pussy is an upstairs show bar located on Patpong 1 street, alongside the market.

Let me explain something about Patpong: Despite having lived in Bangkok for over 5 years now, I almost never go there.

I go regularly to lower Sukhumvit; including Soi Cowboy and Nana Plaza, but have only been to Patpong about a dozen times.

Why is this? Well simply put Patpong overall is a complete tourist trap, of the worst kind imaginable. It also doesn’t have the depth of nice regular bars surrounding it similar to what Nana Plaza and Soi Cowboy have.

Scam bars operate Ping Pong shows in the upstairs bars. Do not go to these shows unless you are ok with being scammed. If you must see one of these shows then negotiate a fee upfront with the management before watching the show. Pay no attention to what the tout with the menu card says. The above pic is a standard menu for the scam bars.

Unsuspecting tourists are promised no cover charge by the touts for the shows but when it comes to paying the bill additional charges are added which mount to around 2000 per person.

This is the internet age, and despite information being readily available people are still being scammed in the upstairs ping-pong show bars. Have a look at trip advisor (search patpong) and there are a couple of people scammed in the ping pong shows on each review page amongst the market reviews.

The scam is for a tout to promise no cover charge and get you upstairs into the bar (he is on commission so will tell you anything to get you upstairs). Then you order a drink which appears to be 100 baht that was promised by the tout. Then the show starts and a showgirl may or may come over and raise her glass with you (this will cost you extra).

Upon leaving you will be presented with a bill of around 3800 baht for 2 drinks. Security will show up if you protest and pressure will be put on you to pay. You can negotiate down but will normally end up paying at least half of the bill. If you are aggressive then fisticuffs can be the result. The police will not be interested to help you unless you kick up a massive stink.

Why don’t the ping pong shows have a set show charge of around 500 baht per person? Or even 300 baht like to in Pattaya to watch a similar show. The performance is usually memorable with an interesting array of objects being played with by the naked women on stage. Make the prices clear and up front and the customers will at least leave without crying scam and posting their troubled stories on authority websites! Black Pagoda is a bar with a great name and scantily clad girls dance on the bridge across the Patpong 2 street in full view of passers by. This should make the bar popular? I wouldn’t know because I must confess I’ve never ventured inside this bar, mostly due to the uninviting entrance and confusing gogo/hostess setup inside. Club Electric blue is ok, but it can be hit and miss. Once, I took a friend there we left quickly after one drink. His words to me were ‘take me away from this freak show.’ There were several anorexic, young looking dancers with sub-par plastic surgery working on that night.

On the other hand, I took another friend there and he loved it because the lineup was better and the girls on stage were doing some nice dirty dancing.

Personally, I hate all the techno rap music they play at Club Electric Blue, and also the terrible air-conditioning which seems to keep the passive smoke lingering in the air rather than remove it.

Sometimes it feels like the whole bar is smoking inside, I wish some bars would actually enforce the smoking ban for the benefit of the health of their staff and the non-smoking customers. I usually just pop in for a draught beer and a perv, and leave when either the smoke or the music become intolerable. Bada Bing is the bar on the left with the girl outside. It is on the first alley joining Patpong 1 and 2 together.

Bada Bing has been the standout bar on my last couple of visits to Patpong. As of early December 2015 the lineup was exceptional, with some really good looking girls and good dancers in there. The layout inside is a bit weird, but it kind of works. If one bar can start to attract the punters back to Patpong then it is Bada Bing IMO, if you don’t believe me go and see for yourself. Bada Bing Girls on the left waiting outside the bar. Packing up time for the market at Patpong. The market traders are reported to ask unrealistic prices, and can get aggressive when bartering.

Some gogo bars at Patpong are known to have half girls and half post-op ladyboys dancing. If you ask they deny anything about ladyboys which is questionable to say the least. Be aware of this if you are likely to be highly intoxicated!

I used to think the live band on the corner were amazing, but that was before I started going to Pattaya more (where they have amazing live music bars). It’s still nice to kick back with a beer listening to the classic songs they play though. A ladyboy waits for a customer on Patpong street 1 as the market is being packed away for the night. Patpong 2 has a strip of bars, but on the night I visited customers were few and far between. The above pic was taken around the 3am closing time. Patpong 2 street, note the taxi driving down it and the lack of clearance for pedestrians. It’s past 3am, and I’m ready for home as there is not much left going on.

I want to like Patpong, but I always leave with the feeling I could have had a better time at Soi Cowboy or Nana Plaza. Hopefully it can drag itself out of the dark ages and reinvent itself to be a premier Bangkok bar area again, but it needs to get rid of the old dinosaur scam mentality of ‘milk every customer dry’ to move forward and succeed.

Bada Bing is the one shining light on my last couple of visits, a bar with a good reputation like this could have a positive knock on effect to make the neighbouring bars take note and follow.

As for the ping pong show scam, it is what it is. If you are scammed in this day and age then you don’t have anyone to blame other than yourself really. Every reasonable hotel has WIFI, and a quick tripadvisor search will give you the low down. 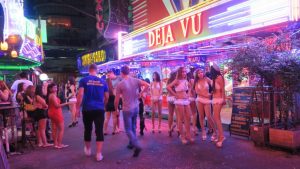 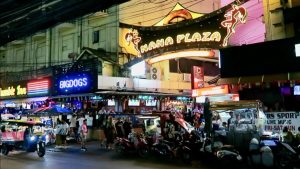 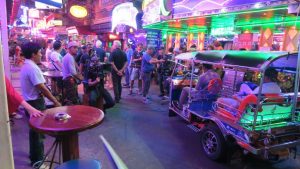