Disclaimer:  This review is subjective and purely based on opinion only. This review was compiled from a visit in October 2015. Also, I must state that travelallasia.com is not affiliated with any company or 3rd party connected to any bar. Happy A Go Go is located on Soi Happy just off Walking Street, Pattaya. It boldly announces itself as ‘Pattaya’s number 1 Go Go bar.’ I’ve been a few times to this bar and usually go there just for a draught beer and bit of a perv. I’ve bought a few girls drinks in the past and whilst they’ve been pretty and enthusiastic, they haven’t been as personable as I usually like. This place has been open since 1995! They must have been doing something right to be in business all those years. You have to walk up the Soi Happy alley to get to the bar at the end.

When I got to the bar on this night first impressions were good as I was greeted by the service staff, who were happy to show me to a barstool around the stage. I ordered a 69 baht draught beer and had a ring side seat to all the action going down on stage.

The bar has a main central stage, with 12 poles on it. There are seats and tables all around the outside and it has a nice open feeling to it, not cramped like some gogo bars. The walls are mirrored, and a mixture of aircon and ceiling fans keep the place from being too smokey. The floor is also distinctive as it is chequered white and black. The music being played on this night was the standard dance techno gogo music, and it was not too loud which was good.

I arrived quite late and there were only 8 girls on stage, none were topless, but they were all pretty hot so I stayed for a drink.

What caught my attention on entering was there was one girl kept on climbing up a pole 6 ft high, and then sliding down it sexily landing in the splits every time bouncing up and down on the floor 🙂 When I was there a few of the girls also kept randomly bending each other over for a bit of dry humping doggy style, thrusting away energetically and screaming wildly.

The girls were all drinking from a communal bucket on a table to the left side, it had about 20 straws in it and must have been some of the cheap Thai whiskey.

A lot of the girls had stacks and stacks of 20 and 100 baht notes stuffed into their skimpy stockings, so it must have been a productive night.

Number 86 had a very athletic body, and had the most amazing hourglass ass to die for. She was slightly flat chested, and had a really nice tattoo on her right thigh. She would have been a good choice out of the girls left.

Number 206 was the pick of the bunch on this night. She was an angel faced stunner, but she knew it and was acting all ‘alpha’ with her fellow dancers. She had a very athletic physique with slight curves, and would have definitely been a handful in the bedroom for anyone game enough to barfine her.

Unfortunately it wasn’t all good on this visit. My draught beer took about 5 minutes to arrive. This is unusual in Pattaya as they normally bring it right out quickly. My worst fears came true as on the first sip it was totally lukewarm and flat.

I did my Quentin Tarantino face from Desperado (see pic below for effect) and reluctantly gulped it down. I did think about asking for a change of beer, but thought better of it as I was pretty drunk and didn’t want any hassle. It was late (2:40am), and I was at the tail end of a 10 hour drinking session. But this beer stood out as the worst I’ve ever been served in Pattaya by a long stretch. I was dressed a bit scruffy on this day, so maybe the staff took me for a complete mug.

I suspect the staff might have done a whip round of whatever beer dregs they could find, or maybe it was just the end of the beer barrel? I hope it was the latter. I nursed about 1/2 of the drink in my drunken state, then eventually paid and left. A Singaporean guy wearing a denim shirt kept on ‘making it rain’ with 20 baht notes on this evening too. It was fun the first time, but it started wearing thin when it seemed all the girls and service staff were having a competition to see who could scream the loudest. Later on he started dancing on stage grinning like a Cheshire cat, it looked like it was his first ever visit to Thailand! As I was leaving he was ordering a big basket of ping pong balls.

The above is a short video of me walking up and down Soi Happy, and also you can hear some of the screaming from the bathroom footage.

The barfines were 800 baht for short time in Happy A Go Go, and I was quoted 2500 baht for short time by a nice young, topless dancing girl from a different visit a couple of months ago. The bar is popular with Japanese customers and the girls will normally give more attention to these guys, as they like to pay over the odds.

I do like Happy A Go Go, and will give it another chance when I return to Pattaya again soon. I like all the happenings on stage, it’s always pretty eye opening and memorable. I’ve always enjoyed my previous visits here.  Next time I might stick to bottled beer, or maybe try to watch the barman pouring my beer if I choose draft again. 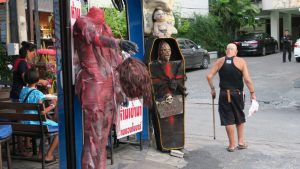 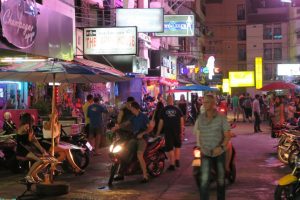 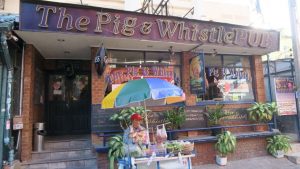 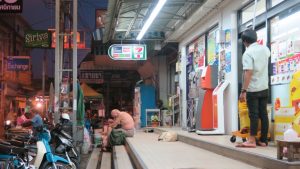